The continous integration hardware platform provides provides a combination of base stations and modem banks, with cabled RF and splitter/combiner network with variable attenuation, plus support infrastructure such as clock distribution, interfacing and control.

The CI hardware is modular in nature and housed in a 19” equipment rack.

A comprehensive bill of materials, together with mechanical CAD files and drawings for the enclosures, will be published in due course. 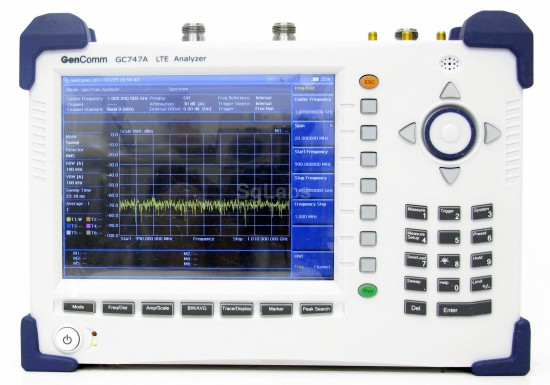 A GenComm GC747A will be used for RF test and measurement.

Continous integration (CI) host. This will be used to automate software build and test.

It is comprised of:

This is comprised of the Reference Hardware Platform:

With the notable exception of the LimeRFE board or any other sort of RF power amplifier or LNA.

A cost-optimised base station comprised of:

Clock distribution. This takes a GPS reference and distributes it to the SDR base stations and RF test equipment. Consisting of:

Up to four modem banks may be connected on one side, with up to four base stations on the other side. The signal routed to and from each base station may be individually attenuated, so as to test operating under varying conditions and to trigger handover.

A bank of 8x LTE modems.

This board is used in the TSTCON test controller and it connects to the APU2E4 single board computer (SBC). It provides 3x ports for connecting to SDR base stations, each carrying console serial and power/reset control, plus a fourth passthrough port for the SBC console.

The board design can be found in the lc-conio repo.

Remote console, reset and power control — base station (B) end.

This board is installed in the SDR base stations and interfaces with its SBC, e.g. Intel NUC.

The board design can be found in the lc-conio repo.